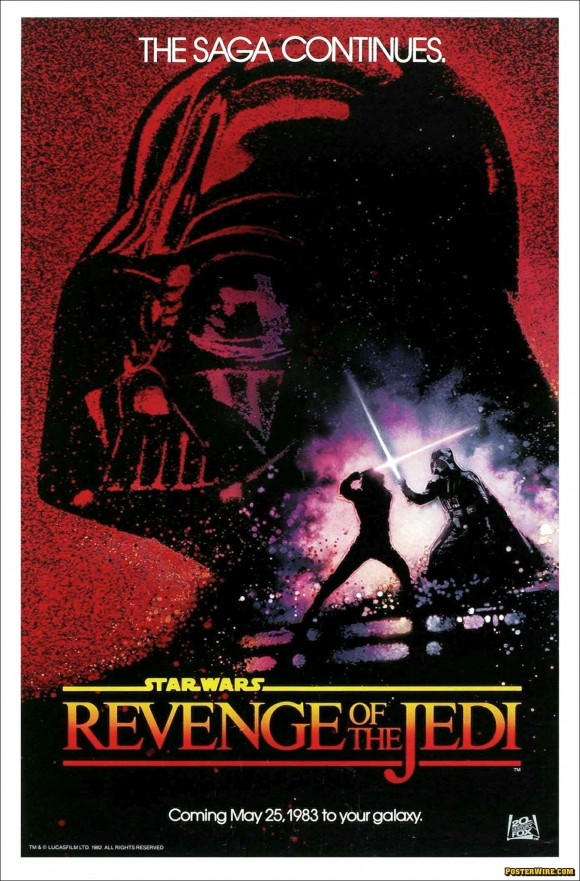 Revenge of the Jedi teaser poster

From the most popular (the “Circus”) to the most beautiful (the “Gone with the Wind”), we now come to the most bootlegged Star Wars movie poster: the 1982 teaser poster for Star Wars: Return of the Jedi (Episode VI).

When first announced, the third (of the original trilogy) Star Wars film was titled Revenge of the Jedi. The Revenge of the Jedi teaser poster (designed by Bill Pate and Drew Struzan) is easily the most counterfeited Star Wars one-sheet (and probably the most bootlegged movie poster of all time). Two versions of the Revenge teaser were released (one with and one without the May 25, 1983 release date), with a majority sold at the time through the official Star Wars Fanclub. If you see a Revenge of the Jedi teaser poster with claims it’s a vintage original, chances are it is a fake. There are countless Revenge bootlegs (4 distinct types at last count), along with methods of spotting the forgeries. (Example: A blurry 20th Century Fox logo is one dead giveaway.)

There are several reasons given for the title change from Revenge of the Jedi to Return of the Jedi. The most recent explanation comes from George Lucas himself: “The title was always intended to be Return of the Jedi, but we made the film under the code name Revenge of the Jedi. Unfortunately, what happened is Fox started promoting the film before we could tell them not to use the title.” Lucas is also quoted as saying a “jedi doesn’t seek revenge” and that the different title was an attempt to flush out bootlegs before the films release.

The other (and probably more accurate) reason given for the title change is that 20th Century Fox was concerned about confusion with the release of another science fiction film around the same time: Star Trek II: The Vengeance of Khan. The Revenge title was quickly changed to Return, even though Paramount decided to later change the Star Trek II film title to Wrath of Khan. Return, Revenge, Vengeance, or Wrath — this is what film executives spend their time thinking about.

Title changes aside, the Revenge of the Jedi teaser movie poster is in stark contrast to most of poster art generated for the Star Wars saga. It is a true teaser in both design and elements used (the artwork is clearly based on images from the previous film The Empire Strikes Back). The poster’s bold neon red color and stipple/posterized style illustration made it a worthy addition to the ever expanding catalog of Star Wars related key art.