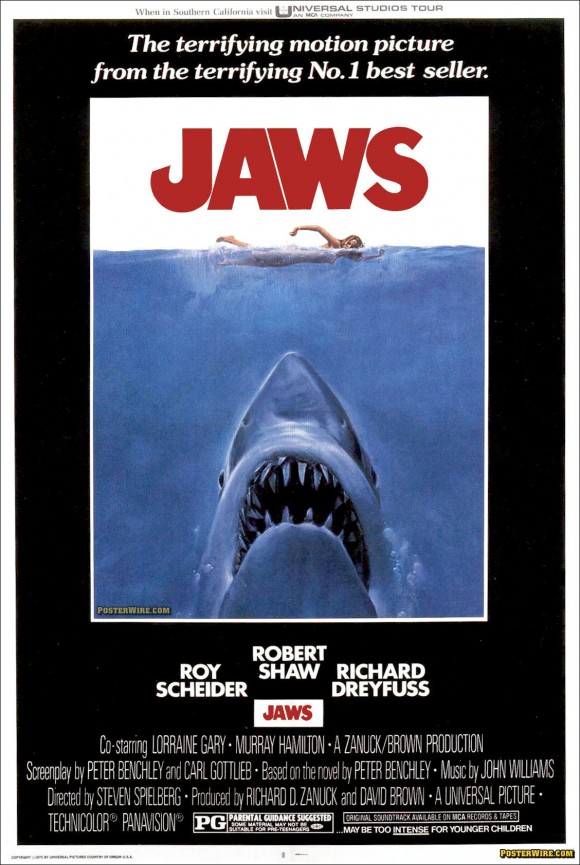 With the recent announcement of another Jaws Special Edition DVD release of the Steven Spielberg classic film, Guido Henkel of DVD Review notes the Jaws DVD cover design “features the crappy new cover art that disgraced the previous release, showing a Mako shark as opposed to a Great White.” This kind of criticism seems a bit unfounded, since the shark as depicted in the poster art has never been a Great White or Mako shark, just an ungodly sized set of teeth bearing little resemblance to any real type of shark whatsoever. The artwork used in the Jaws DVD release is a reworking of the original Jaws one-sheet art. (The updated DVD art was reportedly done by noted movie poster illustrator John Alvin.)

The original Jaws movie poster was created by film advertising legend Tony Seiniger. Known as the “New York Yankees” of film advertising, Seiniger Advertising was one of the biggest forces behind movie posters for several decades. And no “Yankees” team would be complete without a George Steinbrenner, in this case company head and namesake Tony Seiniger. The Jaws artwork itself was painted by illustator Roger Kastel, and remains an icon of film related key art. It also launched Seiniger as the premiere ad design house in the film industry for many years. Despite the countless sequels, the original image of “Bruce” the shark about to devour the disproportionately sized nude swimmer remains an effective image.